Call to end stigma about children in care 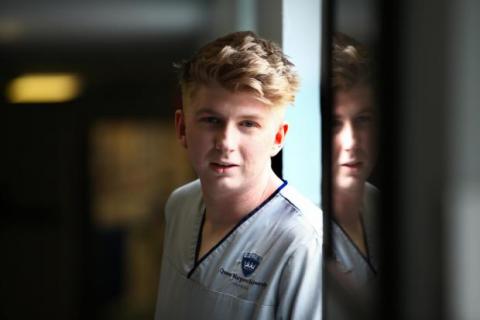 He's far from the stereotype of a troubled child in care - and that's why he's backing a campaign to overturn the stigma holding young people back.

Harry, now 22, first went in to care four days after his 12th birthday.

His mother had been involved in a relationship with an abusive man and his home life had become unsettled.

But for Harry, having a social worker seemed normal so when he was taken into care it came as a huge shock.

He said: "I was aware there were problems but I wasn't aware of the gravity. I didn't realise it was dangerous for me to be in that situation where there was a violent guy.

"I would normally walk myself home from school because we just lived two minutes away but this day the school said I wasn't allowed to leave and I had to wait in the office.

"My social worker came to tell me I wouldn't be going home. I'd got on much better with my previous worker and this one made me feel quite awkward.

"He simply said, 'You're coming with me, you're not going home,' and when I asked why he said, 'I think you know.'"

Harry says he remembers his mum crying as he was taken in the back of a car to a children's home.

He added: "We'd always been told that bad boys went to children's homes so I was expecting concrete floors and to be fed my dinner through a slat in my prison door.

"But I had a really good care experience. I was the youngest there - the average age was 15/16 - and everyone else seemed to be angry and upset and emotional all the time. It wasn't until I got a little older that I understood why.

"I was fine, though, they were my friends."

Harry remained in a residential unit until he was 18. Returns home to his mum always failed and Harry asked to be placed back in the unit.

When he finally left he moved back home for a year before starting his studies.

The student said: "That was a decision I made for myself and I knew I could cope with it.

"By this point my mum had had my younger brother, who has autism, and that focused her and made her determined that things would have to change."

Harry believes he was lucky in having staff around him who wanted to see him do well and were always encouraging.

West Dunbartonshire Council has paid for him to live independently in a rented flat and he's sees his social worker every six weeks or so.

Harry added: "We just have a chat. She tells me to be careful with my money - and also have fun."

For his final two years of school he won a scholarship to fee-paying Kelvinside Academy where a teacher suggested nursing might be the right route for him.

By the time the poster campaign is shown, Harry will have turned 23 and have finished his nursing training at Queen Margaret University, Edinburgh.

While he has used a mixture of luck, hard work and determination to succeed, Harry believes discrimination is holding back his peers.

He added: "The thing I'm trying to tackle now is the glass ceiling that's in place for young people coming from care.

"You can aim high - but not too high. But why shouldn't you be able to have any of the options available to anyone else?

"My friend was taken in to see her pastoral care teacher and given two forms for college - one for hairdressing and one for beauty - and told to choose.

"Why was that all that was offered to her?

"I had a third sector worker say to me at an event, 'You don't look like someone who's been in care'. They obviously have a fixed idea of what their clients look like.

"I was too stunned to say anything back at the time but I was furious afterwards. No one should have that image in their heads."

Harry is one of several young people featuring in a new poster campaign from Glasgow-based charity Who Cares? Scotland, supported by the Scottish Government.

Each poster shows a care experienced young person and a quote about a time when they have experienced stigma as a result of their care status.

More than 80 per cent of the 15404 children and young people in Scotland who are are in care are there because of abuse and neglect.

Duncan Dunlop, chief executive of Who Cares? Scotland said despite progresses in legislation, including raising the age of leaving care from 16 to 21, more needed to be done.

He said: “In communities right across the country, care experienced people still don’t feel able to be themselves. It’s time to change that once and for all.

"We’re calling on everyone to think about the judgements they make and the attitudes they show when it comes to young people in care.”